The Kawai K4 was my first synth, and that's why it has a special place in my heart and in my studio. Actually my K4 (pictured below) is not the one I originally bought and sold, but is instead a cheap find on eBay, nearly 15 years after the first one, and almost 15 years ago as of this writing. (Time flies!) 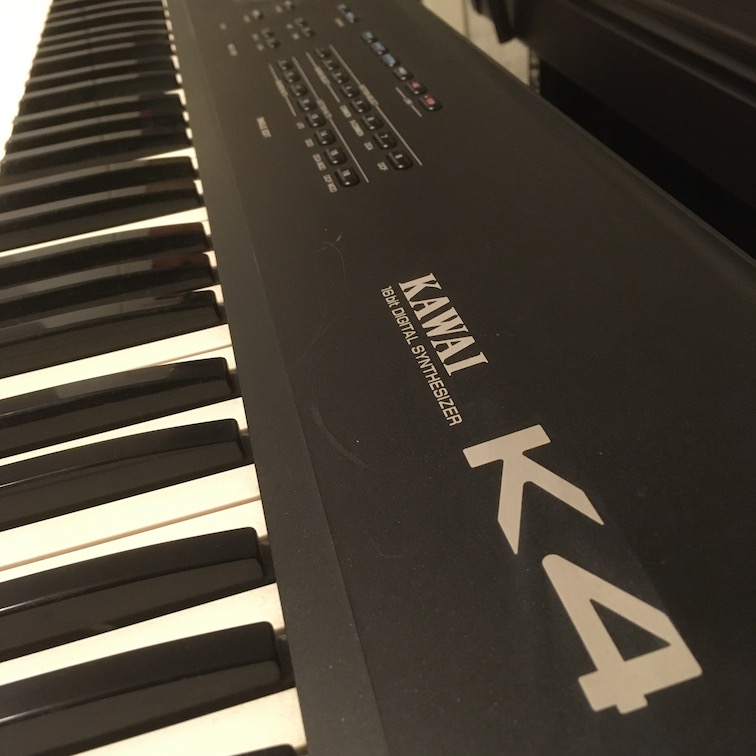 The total set of sounds available for the K4 have always been a bit of a mystery to me. Back in the day there used to be special Kawai data cards with sounds on them, but already in 1992, before the World Wide Web, the patches started to circulate on the Internet on mailing lists and FTP sites. I too ended up with copies of banks that may or may not have been the original factory patches, or from some data cards. I've never been entirely sure which was which.

Since the factory patches for the Kawai K4 are still available for download from Kawai UK (Standard MIDI File format) and Kawai USA (MIDI System Exclusive format), I decided to have a look at them and see if I could create some sort of reference, in the hope that would be useful for fellow K4 users.

Over the years there have been many utility programs to manipulate or at least list the patches in the sound banks, but they can be tricky to run these days, unless you know your way around DOSBox or even an Atari ST emulator. That is why I have been slowly writing a modern utility called k4tool to help me manage K4 patches. I don't know how it will evolve, but for the purposes of this article I managed to persuade it to give me a HTML listing of the patches in a bank.

For example, here are the contents of the K4INT.SYX sound bank, which is one of the nine factory sound banks downloaded from Kawai UK, and probably the original internal sound bank. Looking across the rows you can see that similar sounds have been placed at the same index in different banks: for example, A-4, B-4, C-4 and D-4 are all synth sounds.

How do they sound? Well, I once made a little jingle using the legendary "New Galaxy" patch (it's C-11 in K4INT.SYX) and used it as the text message alert sound on my phone. It sounds like this:

For a more interesting demonstration of the factory presets, see this video by Triton Recordings:

There are also many third-party patches for the Kawai K4, even new ones like those from bitleyTM -- but that is best left for another post.