In a parallel universe, where I didn't buy a Kawai K4, but instead bought a Yamaha SY55…

When I was shopping for my very first synth back in 1991, I had narrowed my selection down to the Kawai K4 and the Yamaha SY55. The biggest difference to me then was that the SY55 had a built-in MIDI sequencer, but I didn't consider that a huge advantage because I was already entertaining ideas of controlling the synth with a PC.

As I recall it, the Yamaha SY55 was even a little bit cheaper than the Kawai K4, so I was seriously considering buying one. At the time the market for synths was very small in my hometown, so the music store that could actually sell me one had to get one from their sister outlet in the nation's capital.

So I put my order in for the SY55, then waited patiently for many weeks, and finally got the call from the store, signalling that my synth had arrived. At this point you should know that I was naturally assuming I would get a brand new synth, and I was willing to pay the list price for it.

When I went to the music store to pick up my brand new SY55, I found out that it was a unit that had been on display in the big store in the nation's capital: the box was opened, and the synth itself had several scratches on it. Still, amazingly, I was expected to pay a premium price for it.

At the time I was young and much more of a hothead than I am now. If such a situation came up today, I would probably start bargaining, but back then it felt like my pride had really been hurt, and (to add insult to injury) there was no offer of a reduced price from the store. So I let the store clerk know in no uncertain terms that I wouldn't be buying the synth because it was not brand new. (Somehow this makes me think of the old Monty Python sketch: "I will not buy this record. It is scratched." I'm pretty sure I had not seen that one when this happened.)

I felt the angry stare of the store clerk in my back as I stormed out of the store. I never went back there, and it went bankrupt some years later (and hmm, I wonder why, when all the other established music stores in this town are still going strong after 30 years). Soon after that I took the train to the nation's capital and negotiated myself what I thought was a pretty sweet bargain on a brand new Kawai K4. I even went back to that store later to buy a Roland MPU-401 MIDI interface and Cakewalk 4.0 for MS-DOS.

Many times I've wondered if and how my life would have been different if I had actually bought the damn Yamaha SY55 instead of the Kawai K4. This thought came to me again recently as I snapped up a bargain: a Yamaha TG55 tone generator on eBay. It is a rackmount module version of the Yamaha SY55, without the onboard MIDI sequencer, but with the exact same sound engine as found in its workstation counterpart. 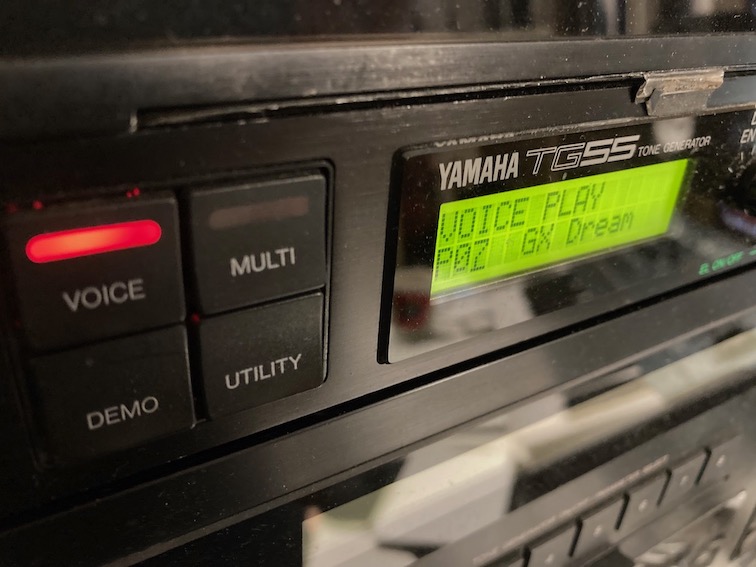 I've been slowly getting acquainted with the TG55, and while it's not exactly fair to compare a keyboard synth such as the Kawai K4 with a rack module, in some weird way it actually makes sense. If I was to compare a Kawai K4r (the rackmount version of the K4) and the Yamaha TG55, the K4r would come out as weak because it doesn't have the digital effects of its big sister the K4, while TG55 would lose because it doesn't have the individual outputs of the K4r. Also, neither the TG55 or the K4 have the built-in sequencer.

What has happened since these synths were released in the early 1990s? Well, Kawai has stopped making synths altogether over twenty years ago, while the AWM2 sample-based synthesis used in the Yamaha TG55 is still being used in the current Yamaha Montage synths. However, a synth like the SY55 or TG55 does not currently enjoy the sort of cult status that the Kawai K4 enjoys.

Really, there was nothing very innovative in the Kawai K4 as such, and on the other hand, the AWM2 synthesis in the Yamaha TG55 already had its debut with the Yamaha SY77 earlier. (I'm a little fuzzy on when AWM first appeared and when it turned into AWM2 -- even the Yamaha Synth History website doesn't make it clear.)

The TG55 has more flexible envelopes and modulation possibilities, but the Kawai K4 has Amplitude Modulation (AM). They both have a selection effects, but in the early 1990s the quality of digital effects was not very good. The rackmount version of the K4, the K4r, does not have effects, but it does have individual outputs, more of them than the Yamaha TG55.

So I guess it was ultimately a coin toss anyway. Now that I have both I can compare and contrast. This comparison would be more accurate if I had the K4r against TG55, or the K4 against the SY55, but I think it is possible to get the picture. Also, I can use the Kawai K4 keyboard to control the Yamaha TG55. The original Yamaha SY55 keyboard has aftertouch, like the Kawai K4, so no loss there. Also, I'm not missing the built-in sequencer much, because I've never had a synth that has one. I have a Kawai Q-80 for my retro sequencing needs, and it surpasses the Yamaha SY55's eight-track sequencer.

The final unanswered question is, then, does either one of these sound engines provide more flexilibity and ease of use than the other? Patches consist of one to four sources, which correspond to digital oscillators. Both SY55/TG55 and K4/K4r are multi-timbral (K4 has eight parts, TG55 has 16 parts), and all except the K4r have onboard effects.

One thing that may actually tilt the balance in favor of the TG55 is its waveform card slot. I have an ongoing project to set up the WaveBlade from Sector101, to provide fresh multisamples for use with the Yamaha AWM2 engine. This is something that you simply can't do with the K4 or K4r.

You can find contemporary reviews of all the synths mentioned here at the excellent mu:zines website. Be sure to donate if you find it useful!